If you’ve noticed, the consensus of the New Age movement purports that the Ego is a negative or “bad” thing. The word “negative” as you know doesn’t necessarily mean bad, but usually an undesirable experience. Positive vs. Negative. The Yang vs. the Yin. Light vs. Dark. The Good vs. the “Bad” or Not So Good. Matter vs. Anti-matter. You get the picture. Duality cannot exist without Oneness and Oneness cannot thrive without Duality. And when Duality and Oneness co-exist together harmoniously, we get a congruent triune force known as The Holy/Divine Trinity.

What is the Ego?

So what is the Ego? Well… it depends on who you ask. We have been so brainwashed that the Ego is a bad thing that we attribute it to any aspect of our personality that makes us selfish and self-centered. Why are you angry at a person? Ego. Why won’t you take out the trash? Ego. Why do you think you’re better than me? Ego. You may argue that all three of these examples purport the negative side of the Ego but one must seek the cause of these effects in order to indemnify why a person acts the way they do in those scenarios.

In order to define the Ego properly, I wish to cite the intellectual master of what the Ego is, Sigmund Freud. According to Freud’s model of the psyche, the ID is the primitive and instinctual part of the mind that contains sexual and aggressive drives and hidden memories, the super-ego operates as a moral conscience, and the Ego is the realistic part that mediates between the desires of the ID and the super-ego. Therefore, the Ego is really the core personality of our true soul.

In the 3D incarnate reality, we experience the ID aspect of our consciousness driven by our triumphs and challenges in a 3D world based on duality. The super-ego is our 7D Oversoul consciousness which is Gaia, attributed to Oneness. And our Ego consciousness is our unique individualized 5D Soul Archetype consciousness that breeds diversity amongst souls. Based on Freud’s model, what defines our Ego is dependent upon our moral compass in experiencing the ID in various aspects based on our desire. The key word here is desire!! Desire can be broken down into two aspects; service-to-self and service-to-others. So if one’s desire is oriented towards service-to-others, does it mean that the actions permeating from that desire is undignified if it results in some unpleasant experiences towards others? And conversely if one’s desire is oriented towards service-to-self, does it mean what they do is undignified if it has a negligent amount of negative consequence on others? It is God’s will that we switch between service-to-self and service-to-others and vice versa (re-legioning) when its appropriate for us to do so.

The Aspects of Consciousness Within the Dimensions

Here is a chart by Dr. David R. Hawkins that delineates the aspects of consciousness within the dimensions: 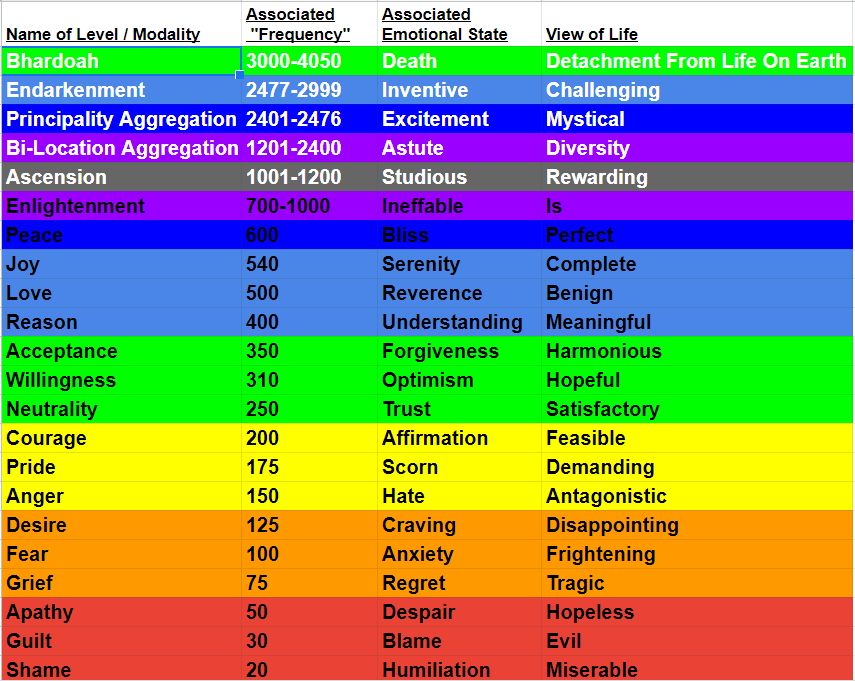 Prior to The Great Earth Experiment, the consciousness of souls never ventured down into Harmonic Universe 1 which covers the aspects of consciousness outlined in the red, orange, and yellow sections. So what does this mean? It means that souls never had the personality traits of courage, pride, anger, desire, fear, grief, apathy, guilt, or shame. Having to endure these attributes of consciousness is what makes us human along with our past lives on other planets within our Galaxy before we ascended as that particular Avatar. Before souls descended to this level of consciousness, the only beings that resided at this level were elementals, plants and animals. For the most part, animals exhibit Spirit consciousness and not Soul consciousness unless they agree to reincarnate as an animal for peculiar reasons. The term used to describe Soul consciousness at the ID level is known as Soul Essence (Ego).

The only attributes of consciousness that existed within souls prior to the Great Earth Experiment were enlightenment, peace, joy, love, reason, acceptance, willingness, and neutrality. Can you imagine how different the individuality of souls were before we descended Soul consciousness down to this level? Souls had no desire!!! Love alone was able to sustain life in the Cosmatrix for sub-eons until the lack of desire gave birth to a dualistic anomaly known as boredom. Boredom was a theoretical existential problem because over time it reduces the level of joy experienced in the present moment and that in turn reduced the intensity of love in the present moment individually and within the Collective harmonic vibration for Source. On the flip side, boredom leads to experiences lacking in deterministic variety and/or intensity hence leading you to default on life experiences which tends to enrich the virtue of Loyalty to the members belonging to your Oversoul.

The Best of Both Worlds – Ego Transcendence

So what are we supposed to do with our Ego? The reality is that our soul needs the Ego in order for it to sustain itself after having endured the Great Earth Experiment. After all, it is the essence of our soul and the glue to our soul’s identity. Getting rid of the Ego is not only undesirable but has tremendous consequences. The soul doesn’t forget unless you elect to suppress the experiences from your Akashic records and detach your association with all those you were involved with in that experience. Now ask yourself… do you really want to forget?

The key to integrating your incarnate experience is via manifesting the aspects of consciousness of your ID experience from the bottom of the chart all the way to the top. This is the process of Ego Transcendence / Integration also known as Enlightenment via the Law of One and the Law of Polaric Oneness/|\Oneless. The lower 5 attributes (shame, guilt, apathy, grief, and fear) are innate to the ID experience. One must start from there and begin to transmute their experience one by one starting with desire; namely the desire to ascend or become enlightened via the embodiment of courage and honesty or to descend and drop what no longer should mirror your innate reality by confronting the brutal truth with respect to transpersonal karma.

The 3 steps in green represent the nexus of the enlightenment process as it deals with the Heart Chakra. Neutrality ensures that you are unbiased on how you value one soul over another including yourself (trust in others and being satisfied on how you treat them and they treat you). Willingness ensures that you’re willing to stick with roundabout perspectives and the entire the ascension process (being optimistic and hopeful). Last is arguably the hardest part which is acceptance (forgiveness is knowing that there is nothing to forgive). After you’re able to accept, the reasoning process is where you’ll begin to discover your soul identity (why God made you the way he/she did). After that is finished, the rest of the steps are intrinsically a joyful cakewalk.

So in conclusion, don’t believe in the New Age misconception that you must shed your Ego in order to ascend. After all, it is a huge part of the makeup of who you are as a soul throughout all your lifetimes. It is about knowing how to rock your Ego. Just do it in a manner that is in alignment with the upper chakras and not constantly with the lower chakras. Traverse down the consciousness spectrum as rarely as possible to the best of your abilities and try to maintain your consciousness spectrum within the 3D (yellow) and 5D (blue) spectrums as often as possible. If you slip, forgive yourself and if others slip, forgive them. It is that simple. Namaste!