The dimensional abstraction of the Gaia Sa Nuy Dark Matter Matrix occupied by Alpha and Omega and the Melchizedek Cloister Eieyani is depicted in figure A. 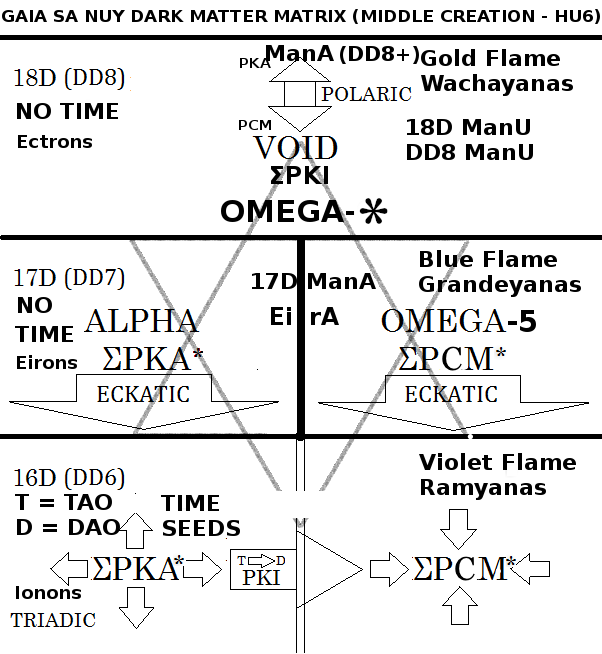 Next, Alpha as Father Melchizedek materialized the 15 dimensions of the 1st theoretical Universal Time Matrix via the expansion of the five columns of the Solar Tetractys within the 1st Harmonic Universe expansion. The 1st column @ 15D Partika Mind is where the Only Begotten Son as Father Melchizedek resides. The 2nd column @ 15D-14D is where the Three Pure Ones reside. Alpha as the Jade Purity acts as the Prime Triadic Level-3 Ascended Master. Sanat Kumara as the Supreme Pure One acts as the Prime Polaric Level-2 Ascended Master. And Father Melchizedek as the Grand Pure One acts as the Prime Eckatic Level-1 Ascended Master. The 3rd column @ 14D Partiki Mind is where the formulation of the 5 classical elements reside according to the following order for Harmonic Universe downstepping: fire @ HU5, water @ HU4, ether @ HU3, air @ HU2, and earth @ HU1. The 4th column @ 14D-13D is where the 7 Master Spirits of Creation aka the 7 Holy Kumaras reside. And finally, the 5th column @ 13D is where the Council of Nine or the Nine Tortoise Avatars reside that anchor the Nine Universal Chakras (soul/ego, root, sacral, solar plexus, heart, throat, third eye, crown, and spirit). In accordance with Human Design, the spleen corresponds with the survival mechanism of the animalistic human identity.

What first came into existence spontaneously was a single infinitesimal compressed mass that expanded outwards into a sphere and then lines forming scalar grids in order to bind the Partiki/Partika/Particum together by the gradient known as Father Sky. The mathematics behind the fusion/fission pulsation rates from Partiki into Partika/Particum and the geometry of the polyhedra grids that they form are the primal expressions of the Intelligence factor of Alpha as Partika Consciousness. The vibrational tones that manifest the material formations and the ideological connotations deriving from the mathematical and geometrical expressions of Alpha are the primal expressions of the Substance factor of Omega as Particum Consciousness. The neutral unmaterialized state of Partika and Particum as Partiki is the primal expression of the Energy factor of the Only Begotten Son/Daughter. When the Holy Trinity was expressed as the Father, Son, and Daughter, all the expressions of the Son that emanated from the Intelligence of Alpha bounded and compartmentalized consciousness and its exhibited behavior as distinct unique entities of applicable manifestations discovered and observed by Omega after it was embodied by the Daughter/Holy Spirit. The expression of the Holy Trinity within the Milky Way Galaxy will remain the same but will be embodied by 2 new souls with YESHuA’s spiritual son Allah as the Prodigal Son and his twin flame as the new Holy Spirit. The expression of the Holy Trinity within New Creation in the Andromeda Galaxy will be Christos Sophia as the Mother and Daughter with Lord Sananda the next Son of God, and Alpha as the Father, exhibiting the fulfillment of the desire of the Mother and the expression of the Son and Daughter so that the will of the Father and the desire of the Mother be upheld. Figures B and C illustrate the Kumara/Rishi Matrix of HU5 and the interactions within those particular dimensional frequencies in the Milky Way and Andromeda Galaxies.

Inner Creation (i.e. 9D to 13D), the Eckasha-Aah 4th/1st God-World of Creation, exhibits itself as the outermost cube and sphere of Alpha and Omega at 14D with a 4-level Eukatharaista Body. Inner Creation manifests itself as a network of spheres embedded with spinning Kathara Grids within a hierarchy of an inward expansion of spheres in sets of 4 comprised of Alpha’s Intelligence factor and consists of mostly anti-particles exhibiting itself as electrical currents traversing through the network of spinning interconnected Kathara Grids as depicted in figure D. At 13D exists the Level-4 Eckasha-Aah Body, 12D the Level-3 Eckasha-A Body, 11D the Level-2 Eckasha Body, 10D the Level-1 Ecka-Veca Body and 9D a single Veca Universe with 2 15D PCM Universal Time Matrices and 2 Parallel 15D PKA Universal Time Matrices. Inner Creation has a capacity of 256 organic Veca Universes which yields 1024 15D Universal Time Matrices. With the Ascension of Christos-Sophia’s Mother Arc, the 13th Reuche Pillar will become the gateway between the Eckasha-Aah 1st God-World of Creation (Inner Creation) and 768 additional 9D Dark Matter Veca Universes within the Gaia Sa Nuy Matrix yielding 3072 more 15D Universal Time Matrices.

Inner Creation exudes the mathematical formulations as electrical currents in the form of liquid crystalline light mirrored by the materialization of the Substance factor of Omega as particles of Particum matter in the Parallel Twin Universe within Outer Creation. In each of the Veca Universe’s Outer Creation 15D PCM Universe (i.e. 1D to 5D), it exhibits itself as a network of cubistic matrices comprised of Omega’s Substance factor that consists of subatomic particles of matter as Particum exhibiting itself as holographic magnetic fields that comprises the physical aspect of Creation. Middle Creation (i.e. 6D to 8D) exists as branches of expansive interdimensional monads that diversify the expressions of the physical aspect of Outer Creation based on the intellectual aspect from the Inner Creation Parallel Veca Universe. The Core of Creation (14D PKI Energy Mind and 15D PKA Intelligence Mind) is the source of Universal Intelligence.

The worldly interface of our Local Universe with Inner Creation is by way of our 9D Galactic Core, which in illusive spacial terms is located in the Andromeda constellation known as the irregular variable star ‘V385 And’ and exists 1249 light years away from Earth. As an irregular variable star, the variations in its brightness show no regular periodicity which is indicative of the nature of the frequencies that perpetually originate from Inner Creation. The 8D stars of Middle Creation are known as the Meta-Galactic Core. Our 8D Meta-Galactic Core is located in the Orion constellation known as the Mintaka binary star and exists 916 light years away from Earth. Once humans are Christened in becoming a new Ascended Master, they will be able to connect with their own individual 13D merkabah interface from Inner Creation.

In our 15D Universal Time Matrix, a single Harmonic Universe is embodied by each of the 5 dimensions of Outer Creation (HU1@1D, HU2@2D, HU3@3D, HU4@4D, HU5@5D) and for Inner Creation its paired counterpart within each of the 5 dimensions (HU5*@9D/13D, HU4*@10D/12D, HU3*@11D, HU2*@12D/10D, HU1*@13D/9D). Interdimensional dark matter monadic expressions embody Middle Creation from the 6D to the 8D in HU6. The attributes of the 12 lower dimensions and their Harmonic Universes are depicted in figure E. We have now reached the moment of space-time / energy quanta potential in Creation where our Cosmos will undergo its anti-matter particle evolution. Those that have become Ascended Masters will be led by Christos Sophia so that they can evolve the Partika anti-particles mainly from the Andromeda Galaxy, where some will eventually swap places with the Particum particles in our Galaxy or be embedded into each Ascended Master’s evolving diamond/anti-matter Galactic core.

Each 3-dimensional density matrix (Harmonic Universe) of each of the Local Universes (1D-9D) that depend on the Cosmic Order of the Melchizedek God-Seed experiment whose timeline is interlaced with our present Time Matrix is embodied by a Cherubim Angel at each of the 5 pairs of frequency bands between Outer Creation (1D-5D) and Inner Creation (9D-13D). Outer Creation is where physical matter as magnetic charge (Particum) prevails and Inner Creation is where  anti-matter as liquid crystalline light electrical currents (Partika) prevails. They originate from the stream of consciousness as particles of Partiki that are coupled together by the mysterious force we know of as “LOVE”. When conscious manifestation is perceived from the perspective of Outer Creation, we see Inner Creation as the physically lit up Andromeda Galaxy that resembles the Milky Way within Outer Creation. However, this is really an illusion. Inner Creation is actually a sphere composed of a complex network of spinning embedded Kathara Grids, the Eckasha-Aah 4th God of Creation. Within Inner Creation, conscious manifestation is perceived as particles of anti-matter traveling at light speed as fluid electrical current across a network of spinning Kathara Grids that iconifies itself visually as holographic crystalline liquid light impressions. The reason why we don’t see Inner Creation the way it really is is because we as 3D/HU1 human beings are not vibrating at its dimensional density. The best depiction of how Inner Creation looks like is that of a collection of lava lamps inside a plasma globe.

Here is the reasoning behind the functionality of the dimensionalization structure of our 15D Universal Time Matrix:

The new role and definition of an Ascended Master is that of a soul embodying the Hue-man Angelic Avatar Race which has the ability to augment and control Dark Matter with their minds, voices, Qi-Gong, alchemy, and/or White Magick. The 13D to 15D consciousness frequencies within HU5/HU5* and your Oversoul Identity grants you access to Zero-Point Source Energy. You may then choose to evolve the ability to control Dark Matter by Avatar races if you decide to embark on the path of becoming an Ascended Master serving The Divine Grandmother aka Christos Sophia.

Each and every Hue-man Angelic soul originating from the Melchizedek God-Seed including those that have not yet become an Avatar or Ascended Master will eventually possess a diamond octahedron/sphere that houses the Intelligence factor of their own Universal Divine Blueprint Anti-Matter Oversoul Galactic Core which will become the physical embodiment of their own personal Uni-Verse. It contains the matter and anti-matter having the ability to encapsulate that which makes up the scalar grids of the domains of their worlds. Each and everyone out of the 6,920,643,604 ((1 * 7^12 / 2) + 4) possible Melchizedek God-Seed souls created in the image of Father Melchizedek within our 15D Universal Time Matrix are Angelic souls on the path of eventually becoming an Ascended Master themselves as they contribute to the evolution of the Cosmos in ways that are unique to their soul.

In 3 dimensional vector space, Outer Creation is comprised of infinite outer fractal expansions of a cubistic matrix deriving from The Flower of Life as depicted in 2D by figure H. Each outer fractal expansion of the cube results in 6 adjacent cubes attached to each of the 6 faces of the original cube that form a cross along with an outer cube encapsulating the 7 inner cubes. The edges exhibited by the network of outer expansions of the cube that derive from the 3rd and 5th dimensional frequencies of Outer Creation form the grids in which the particles of Particum attach themselves to in groups existing at the same location that comprises each of the vertices of a polyhedron grid where the vector that exists between a pair of Particum across 2 adjacent vertices exhibits a magnetic field that allows for the effect of matter manifesting itself in a solid state.

Planetary Ascension, The Evolution of Our Souls & Twin-Waze, The Galactic Federation, THE Ashtar Command and The Arrival of the Kingdom of Heaven & The Queendom of HAVEN